In a letter to the Superior General, Fr. Dubuisson reports on various goings on in the province, including the slave sale. "The Fr. Prov. has a formidable task to accomplish, that of selling...the R. Fr. knows what." He takes issue with one of the fathers discussing the sale in front of an enslaved girl. Dubuisson worries that the sale will reflect poorly on the Society among the public. In other news, he lists several scholastics who have left the Society, laments over a sore throat, glories in the growth of his church at Alexandria. There are other small personal notes in the margins. This letter is in French.

It occurs to me that Your Fathership is now waiting for some private communication from me. I have not had many occasions to see the inside of things. To judge from the outside, everything goes well enough at Georgetown and Fredrick. The Fr. Spiritual of the former college has spoken to me of a lack of spirit in the Society among many members in the inferior ranks. That is, among people without a true vocation --- I believe I may have seen some similar things myself; one of the scholastics who left us, last year, appeared to me, and has appeared for a long time, little suited to the Society; but I did not bring up this feeling, lacking an occasion to establish solid proof, and the good Fr. Spir[itual] is known to give sometimes too much leash to his critical impulses. I have not found the proof to base, from this report, a positive judgement, unfavorable to the Superiors.
The Fr. Prov[incial] has a formidable task to accomplish, that of selling….the R[everend]. Fr. knows what. It has much been spoken of; the measure is attributed to him, since it was him who wanted it. The Fr. superior of St. Inigoes appear to have ceded too much to his opinion…: I had for a cook, at Alexandria, a black girl, full of religion and very intelligent, who was on these properties, and who heard this father explain, before the entire table, on the subject of the Fr. Prov[incial] in a manner most improper. The effect of these measures would be most unfavorable to us, in Washington and in Alexandria! Very few people have talked to me but I believe this is out of personal respect. It is believed strongly that the enemies of religion will not hesitate to seize this material to serve as a weapon against us. Until now, I had not known that anything was public, but myself, I admit, I do not consider the thing to be finished: I would not be surprised to see my former doubts realized, either through scandal or through the security of our funds and future exploitation of our rural properties.
In Philadelphia, it appears that all goes well. One of our Frs. who passed through there not long ago did not stop criticizing the Fr. who directed the rebuilding of St Joseph. Some articles of enormous expense (a rug of 500 piastres); no chairs for teaching; no convenient place for a crucifix on the altar: then when the Fr. had returned to his former post, he displayed a certain lack of respect towards his superior, he had not left him any accounts etc.- I confess that Frederick appears to me to have, in certain things beyond what is required, a quite small city. I do not think that another would hope to leave it in similar expenditures. After all, I am far from believing that he did it without the assent of the superiors, and the blessings which the Lord has dispensed on his works form a beautiful counterpoint to those who would wish to find fault in his actions.
Some people at Georgetown have unburdened themselves to me of their regret that the Fr. Prov.l did not remove the Fr. who holds the office of Rector of Holy Trinity Church. This, here, is also an affair in which it does not seem to me easy to decide. The two Frs. Provincials, successively, have been informed of everything: it does not seem to be my place to meddle.
I perceive easily the difficulty of the task of our R[everend]. Fr. Prov[incial]. (He last spoke to me about the singular spirit of Fr. Ryder!). He would not be inclined to put in his judgement a confidence without bounds (perhaps this comes to him a bit from the fact that he himself, in more than one circumstance, did not appear to make much of my judgement, and because his manners are not at all to my taste); however, I consider as certain that his firmness, his energy, and his ability, joined with his origins, make him the man most fitted to govern this Province in the times to come.
What worries me, my Very Reverend Father General, is that I do not know what the Lord has in store. I receive flattering accounts of the respect and the affection of my little group of followers, and also of the non-catholics of Alexandria- I always have in my church a good number of the latter, both in the morning and the afternoon. As for the children, they say they have never before had a similar chance. However, I work always with a feeling of my insufficiency, of my lack of qualification, lack of learning, lack of zeal, which is not only difficult, but also discouraging. And now to top it all off my sore throat has come back. After the days of high heat, we have had a week of cold (to have a fire in June!). I could have caught cold: I have given specific instructions to many people, in order to prepare them for confirmation, plus my French class, my catechisms etc. In short, I have had to suspend everything; my hoarseness is such that I cannot speak with anyone without dangerously renewing the weakness of my throat and perhaps of my uvula. I hope that within two or three weeks, I can return to my work, or at least partly. What consoles me in the midst of the miseries of my spirit, mind, and body (at the age of almost 53 years!), is that I do not dream to live for anything else but to work For God’s Greater Glory.

Fr. Lucas has been transferred to Frederick -: I am not surprised, and I believe that it was a good idea.
Fr. Brogard is no longer among us – This did not surprise me either: many things made me doubt whether he possessed the true spirit of the Society And the poor Fr. Grace – He has also withdrawn! Certainly this is not without reason – But it pains me to see him rejected in this way after having passed more than 20 years among us – Miserable humanity! But Let anyone who thinks that he stands take heed lest he fall!
My confirmation work has made me praerastine --- 60 people have received this sacrament; the ceremony was truly edifying: I will speak to Your Fathership at length in my next letter – my throat is quite tired from taking confessions etc. all week long! Sometimes I am tempted to give up the will to recover my voice; and yet I feel again the strength and need for work! Let it be done, let him be praised and exalted above all things---! Remember, Most Reverend Father, Your most humble and loving servant in the Lord and of the son
Stephen L Dubuisson,
S.J.


[In margins]
I am tested by a lively affliction on the part of my family, my V[ery] R[everend] F[ather] by my oldest and youngest brothers who are not in agreement on the matter of money. I believe the difference will not become serious-
The General Baron of Marshal, minister of Austria to Washington, I remember it was he who introduced me to Her Majesty the Dowager Empress at Munich, he came to see me at Alexandria: I was absent, and I have not be able to find him again, at his lodgings I saw his secretary, a nothing of a man. The good Mr de Pilatt, of Vienna, had written him to give me his regards.
My last letter to Y[our] F[athership] was on April 30 – I do not know if I asked Y[our] F[athership] about my cousin Madme Des Garets (Sister of Madme D’Mahony) of Lyon, who sent me a very pretty and complete ornament; without being an object of prin, it is a highly useful present – Madelle Harper made me a present of a monstrance; the feet are of silver, but perfectly worked. All is coming together well for my poor Alexandria church. 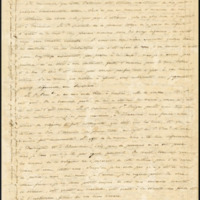