In a letter to the Father General, Vespre explains the rental and management of the former plantation lands. He suggests ways for streamlining their oversight. He also expresses doubt that the Jesuits will ever receive the full proceeds from the sale of the slave community.

Very Reverend Father General
5. July 1840
In the Peace of Christ

Fr. [Grieset?] did not give me his letter in time and it will not find a place until the ship departing the 16th of this month rather than the 8th as I had promised. The Fr. Provincial came here on the 6th and departed 3 days later.
In my letter of the 5th of this month, as consultor, I have already given you the explanation promised in my letter of 20 June, of the extraordinary request by Fr. Ryder to the Province for 10,000 dollars; when the Fr. Provincial arrived the next day, he remitted to him a note in his name and that of the 4 consultors of the college asking him to order the Provincial Procurator to settle his accounts with the college – The Fr. Provincial communicated it to me, but upon reading the signed promise by Fr. McSherry, as Rector, to pay to Fr. Mulledy, upon his request, 24,226 dollars, he remained perfectly persuaded that there was no acquisition made by the Province from the College’s lands in Washington, but that the sum had been given by Fr. Mulledy, who was then Provincial, under the appearance of a loan but actually to pay part of the debts which he had contracted as Rector of the College – He remained equally persuaded that the college had received not only 15,000 dollars, as the Fr. Ryder pretended to him, but 24,226. – I asked him however to call together the Fr. Rector and the four consultors so that in his presence I could give them myself the necessary explanations in order to draw them out of the error in which they appeared to be – after the exhibition of the aforementioned receipt from Fr. McSherry; the Fr. Curley, one of the consultors and a bookkeeper before entering the Society, declared then and there to Fr. Ryder and to the other consultors that they had been, and himself as well, under a false impression, and that far from being under no obligations, the Province was creditor for 24,226 received as a loan. However, the Frs. Ryder and Fenwick, who understand nothing of business, did not want to hear anything despite all the pain which the Fr. Provincial had taken to persuade them; the one and the other both told me things so scathing and insulting that I lost my patience and responded with much vivacity but without any epithets or personal insults. I excuse them from a good heart because they are naturally very caustic, not understanding anything of business, and find themselves entirely frustrated in their positive expectation, and that the Fr. Provincial who appears to suffer himself for me did his best to persuade them. That evening and the next morning they found that their charges were entirely free, and my assertions justified. The College books, upon better examination, showed that it had received more than 23,000, as the Procurator had told me – It is strongly possible that they wrote, as Fr. Fenwick told him in the meeting, to Fr. Mulledy in order to have him declare if it had actually bought the College’s lands in Washington for 25,000, as they pretended to him, in which hypothesis they hoped again to have been given 2000 by the Province. But although the Fr. Mulledy responded affirmatively, the promise of Fr. McSherry is so clear that it gave everyone the denial; and what is more a Provincial cannot pay 25 thousand dollars for a tract which is not worth more than 4 and not only is sterile but besides is subject to a tax of more than 200 dollars per year when the Washington Corporation wants to demand it. The Fr. Provincial is so much persuaded that I do not believe anymore that he was part of that faction. – I believed that I should enter into these details because Fr. Ryder could write to Your Fathership to bring up this business.
I pray again that my letters, have been put together, at least since my return here so that I can refer in future correspondence by indicating simply the N[umber], or date, and the paragraph without repeating it over again.

Footnote: Fidecommesso is a legal tool to hold property in trust. 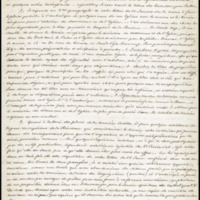